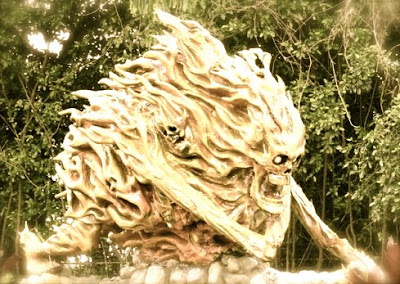 Today's myth comes to us from the Llanos of Colombia (Arauca, Casanare, and today's department, Meta). It is called La Bola de Fuego or The Fireball. In a strange turn of events, I have 2 nephews, 1 niece, 1 grand niece and 1 grand nephew who live in the Llano. One of my nephews insists that he has seen the Bola de Fuego. You be the judge.
La Bola De Fuego
Some say that the Bola de Fuego is a fiery ball about 2 meters in diameter. This ball rolls about the countryside moving very quickly from one place to the other, going over hills and crossing crevices with ease. When the ball stops, sparks fly and it emits a sound similar to a gas lantern. Up until this point, one might think that this Fireball actually sounds like Ball Lightning, a strange atmospheric phenomenon. However, this is where things turn ugly.
The story is told that this "ghost" of the plains came from a ranch on the plains whose owners were a young a couple. The wife was quick tempered, malevolent, and extremely jealous. One day her husband asked her to prepare lunch for 60 VAQUEROS (Cowboys) who were planning to spend the night at the ranch, so that early in the morning they could leave in search of lost cattle. The wife reacted with great anger to this news, so the husband left her alone without having cut the wood she would need in order to make the lunch.
The next day, shortly before lunchtime, she remembered that she needed to prepare the meal. When she went outside in order to find the wood that she needed, she became enraged when there was nothing there. She grabbed the axe and left to cut wood. As she walked through the hills, she heard her son, Juan, crying. This made her even more angry. Upon finding her son, she lost control and killed him. When she realized what she had done, she went mad.
At that moment, the "Spirits of the Hills" cursed her and she exploded into a ball of fire which is forced to roam the Llano in search of her son Juan.
Some say that when they see the Bola de Fuego, they can see the image of an ugly woman with the headless body of an infant in one of her arms and an axe in the other.
If while visiting the Llano, you have the misfortune of seeing the Bola de Fuego. DO NOT, I REPEAT, DO NOT PANIC -- unless your name is JUAN. Apparently, she only hurts people by the name of Juan.
Llanos Myths / Legends