Showing posts from September, 2011
Show all

When Fuentes released Fruko 's second album, A La Memoria del Muerto (In Memoriam), in 1972, the lead singer was Edulfamid Molina Diaz . A tall, skinny man, Edulfamid became known for his great voice, reminiscent of the best Cuban singers, and for his peculiar dancing style. He would forever be remembered as Piper Pimienta . He sang many of Fruko 's Salsa hits, and was part of several different bands. Ironically, the words he sang in the title song of A La Memoria del Muerto would be used during his own funeral. Tragedy had been chasing him around Colombia. In the 80s his son was killed during a shooting, and in 1991 his house went up in flames with all his music inside forcing him to cancel concerts. In June 1998, Piper was assassinated in front of his home in Cali. He had just won a civil lawsuit over royalties. But, as he sang: "On the day I die, I don't want cryings or rosaries. . . I just want my friends to dance in my memory. . . ." So here
Post a Comment
Read more 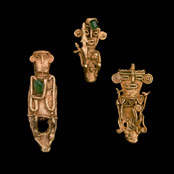 Today's myth takes us to the department of Tolima. However, before we can get to the myth, we need a brief history lesson. So, let's go back to the 1500's.............. Not many years following the discovery of Bogota, the original conquistador of the area, Gonzalo Jimenez de Quesada, set out to explore the area of what is today known as Tolima. There he found three fierce groups of natives: the Coyaimas, the Natagaimas, and the Pijao. Of the three, the Pijaos stood out for their brutality. They loved to mark their paths with the bones of their enemies. The Pijaos (now extinct) were a tough group to conquer -- I could write a series on these guys. Suffice it to say, they left a trail of death and destruction in their wake. These Indigenous groups (and the Muisca) buried small dolls, made of pure gold, with their dead -- called Tunjos. It is from this tradition, that we get today's myth -- Los Tunjitos. This is a goody for those wanting to get their kids to
Post a Comment
Read more

By Colombian Mommy - September 21, 2011
DIABOLINES -- there is probably not a person from Sucre that has not purchased these little treats. These are delicious toasted cheese snacks that are famous in the region. Made from Tapioca flour, eggs, salty cheese, milk, salt and butter. They are worth a taste, albeit a small one if you want to watch your figure. Here is a website with a recipe. Unfortunately, it is for making a HUGE batch, and unfortunately I do not have access to salty cheese, so I did not try to reduce the amount and make it myself. But if you are interested, a libra or pound in Colombia is equal to 500 grams, not the same as a US pound. If anyone attempts this recipe, let me know how it turns out. http://diabolinescorozaleros.blogspot.com/2011/02/diabolines-corozaleros.html
Post a Comment
Read more

In 1968, Julio Ernesto Estrada, Fruko , toured New York as the percussionist for the Corraleros de Majagual . He was already curious about Salsa music, and his intrest became cemented here as he met and performed next to the big names of the new genre: Tito Puente, Richie Ray, Bobbie Cruz, Willie Colón, Hector Lavoe, and the Ray Barreto Band. As Fruko reminisced during his interview with La W Radio Station in Medellín, it was during one of these trips to New York that on one occasion a television hostess asked him on camera, if he and his band were bringing "la hierbita" from Colombia. This was a deliberate pun. The Corraleros had a hit song called "La Hierbita" or Yierbita (grass, lawn). But " yierbita " was also a euphemism for a less innocuous, yet very popular plant smoked during the sixties. The song was a catchy clean tune. I guess "quiero sentarme contigo en la hierbita, en la hierbita, en la hierbita. . . ." (I want to sit wi
Post a Comment
Read more

By Colombian Mommy - September 19, 2011
In the Department of Sucre, you will find several swamps. Among them is the Pajaral swamp. It is known as the Enchanted Swamp. See it on a map here: http://www.indexmundi.com/z/?lat=7.3827778&lon=-73.9530556&t=l&r=280&p=cienaga_pajaral&cc=co&c=colombia In the rainy summers, the waters of the swamp become deep and turbulent. On those hot, wet summer days. Strange things have reportedly happened in the Enchanted Swamp. First, years ago, in the waters of the swamp, there would appear a giant catfish. It was so large, that to catch it became the goal of many a fisherman. In fact, men came from all over for a chance to catch the giant fish. But, no one could harpoon it. Even a well aimed harpoon would be deflected. The fish was thought to be enchanted. Next, one particular August, years ago, both a cow and a pig were seen standing in the middle of the swamp, as if they were dry land and not in the middle of a deep swamp. Finally, a man by the name of
Post a Comment
Read more

Leonel Alvarez? Can He Do IT?

By Colombian Mommy - September 14, 2011
In Santander, as well as in other departments, this breakfast treat is very popular. Give it a try. Caldo de Papas Step #1 --Place the following ingredients in a pot. 8 cups water 3-4 whole green onions with the roots and green stem chopped off AND one or the other of the following: 3-4 ribs with rib meat OR 3-4 chicken legs with skin . Step #2 -- BOIL these three ingredients until you have a great broth. Remove the meat/bones (use these in another recipe as typically the meat is not served with the soup). Step #3 -- ADD: Several peeled potatoes sliced in 4-6 lengthwise slices. (I prefer Yukon Gold which when peeled are about fist size – in this case I add about 5 potatoes). 1 teaspoon of salt -- or salt to taste Step #4 -- BOIL until the potatoes are soft and begin to disintegrate. Add more salt if necessary. Step #5 -- SEPARATELY , mix about 1 teaspoon of FINELY chopped green onion with ½ teaspoon of FINELY chopped cilantro for each serving bowl you plan
Post a Comment
Read more

TUNES FOR TUESDAY -- A Living Legend

In March 2011, in a copy cat show that the Radio Station La W dares to call Salsa Con Estilo (an alleged homage to the original), the young host interviewed Julio Ernesto Estrada , Fruko, and called him "A Living Legend." That part might be true, he is a legend. And there were several things Fruko said during the interview that caught my attention because of their historical value. Fruko said that his Great grandfather, Luis Felipe Rincón, came from Santiago de Cuba to Colombia to work on the construction of the famous Colombian railway, the Ferrocarril de Antioquia. Work on this rail began in 1874, and when it was finished in 1929, it finally linked the remote area of Antioquia with the rest of Colombia. The Ferrocarril was hailed as an engineering achievement because as the the people from Antioquia say, their mountainous terrain is only comparable to certain mountain ranges in Mars. Fruko's great-grandfather helped build the Tunel de la Quiebra . Fruko
Post a Comment
Read more

By Colombian Mommy - September 12, 2011
In Santander (and also Antioquia), today's department, there is a myth about a woman with LONG, messy hair. She covers herself with her long hair, that reaches down to her feet. She wears a LONG dress and has, you guessed it, LONG fingernails. Her name is La Mechuda, though some do call her La Cabellona. According to the men that have seen her, she is beautiful, with a beautiful face. She seems to appear and disappear randomly, but always seems to be in a hurry. Those that have seen her report that it appears like she is floating. In Santander, when she appears, it is with the distinct purpose of scaring only women.
Post a Comment
Read more

I have to preface this with the fact that I am NOT a huge fan of beauty contests -- however, this point of view is not shared by most Colombians. Five years ago, while in Colombia for our adoption, I sat with the whole family and watched the Miss Colombia spectacle. Anyway, for those of you dying to spend your evening watching the event, here is a preview. This is the interview with Miss Colombia.
Post a Comment
Read more

TUNES FOR TUESDAY - The link between Salsa and Ketchup!

A few entries ago, we started heading towards the point where Salsa, Fania , and Colombia definitely intersect. We found out that if such a point actually exists, it would have to be Antonio Fuentes' music label, Fuentes . We talked about Antonio's trip to Philadelphia in the 30s, his return to Colombia, the establishment of Fuentes in Medellin in the 50s, and the creation of the Corraleros de Majagual Band . And that's where life happened and we got interrupted. Well, the Corraleros the Majagual began touring around Colombia and abroad. By 1967, when they toured Venezuela, one of the kids who used to carry instruments and run other errands for the band, had become their new timbalero or percussionist. The kid was sixteen years-old and his name was Julio Ernesto Estrada . Julio's face and especially the gap between his two big front teeth seemed to resemble the character used in the commercials of a brand of ketchup in Colombia at the time, Salsa de Tomate Fruco
Post a Comment
Read more
More posts