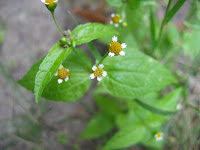 What are Guascas?
These small plants belong to the Daisy family. Originally grown only in the Andes, Guascas were brought to the United States (date unknown) and Great Britain (in 1796) and have thrived. The plant is known as the Gallant Soldier (Galinsoga parviflora) and is considered a weed in both the US and Great Britain. However, in the Andes, from Colombia to Peru, it is considered and essential herb. Rich in minerals, it is used in several Colombian dishes including: Ajiaco (from Bogotá) and Mute (from Santander) – [see tomorrow’s post for the recipe]. 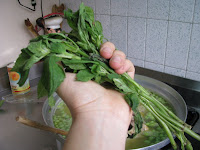 My husband remembers that his mother had a Guascas plant in her garden and would add guasca leaves to the family’s eggs.

Anonymous said…
These are the most important ingredient for Ajiaco
April 1, 2009 at 8:34 PM

Anonymous said…
just returned from Columbia. Loved Ajiaco. Found Guascas in Half Moon Bay at kitchen store. Do you have an Ajiaco recipe to share?
Li
April 7, 2009 at 5:48 PM

Anonymous said…
If anyone knows where to find them FRESH let me know. RUBENRLEON at GMAIL dot com. I've searched the web for seed, or seedlings. No way. Most people in the states know them as a invasive weed known as the GALLANT SOLDIER.
May 13, 2010 at 5:26 PM

Anonymous said…
I found the Fresh Guascas (Gallant Soldier) after spending months of research, posting on blogs and gardening websites and about $250 in overnight shipping from the East Coast from people I met online. As of two weeks ago I FINALLY have FRESH Guascas growing on my back deck here in San Diego. I have colombian friends that are so excited about the possibility of having fresh guascas here in the USA. Interested? My email is at rubenrleon at gmail dot com. Fresh Homemade AJIACO soon!
July 28, 2010 at 11:41 AM

mrlata said…
I know this is years later, but in case anyone is reading this....this is the weed galinsoga here in the US, it is EXTREMELY common so you should not be spending lots of money finding it! Just go to any patch of land, farm, grassy path, at least on the east coast, and you'll probably see it! I would suggest finding a farm and picking it htere, and not by the road edge (pollutants, etc) but the farmers I know would love for you to take as much as you like ! :-)
October 29, 2013 at 9:07 PM

Anonymous said…
I'm growing it and have live plants and seeds here in California.
October 8, 2014 at 7:19 PM

cpv said…
Does anyone know if this is commonly found in South Florida? I have been searching for years and have been unsuccessful. I have been forced to buy prepackaged frozen 'ajiaco' components at the Spanish markets just to get the miserly inclusion of guascas that it contains in order to make ajiaco over the last few years. Just discovered that I can order some dried guascas on amazon but would very much prefer fresh. Any help would be greatly appreciated. Thanks :)
November 13, 2014 at 7:01 AM