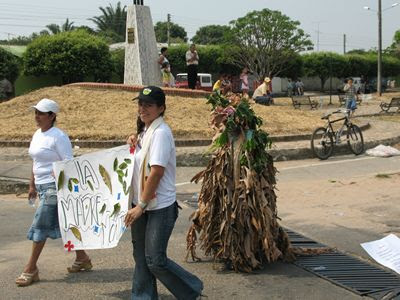 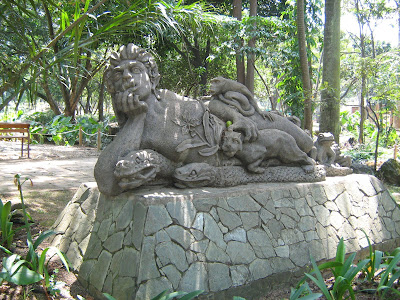 The myth of the Madremonte (Mother Mountain), and I do say myth though many campesinos in Colombia believe in her today, has it's roots in the indigenous cultures of Colombia and is known throughout much of Colombia including Antioquia, Caldas, Arauca, Caqueta, Amazonas, Guainia, and perhaps more departments.

The Madremonte looks like a large woman. She has large, bony hands, large teeth and Betty Davis Eyes -- which on closer examination glow. Her body is covered in leaves and moss. Her hair is a tangled mess of plants and moss which often covers her face.

She lives in the mountains and jungles, (in Antioquia and Caldas she lives in swamps where streams are born. People who claim to have seen her, usually report to have done so near thickets and bushes in jungle like areas. Others report having heard her bloodcurdling screams and groans on stormy nights.

She rules the winds, the rains, and all the vegetation, and her role is to protect nature. She punishes those who invade her territory, by making them get lost. Suddenly paths disappear and become overgrown with vegetation, mountains change their shape, and the person becomes dizzy and will often sleep for several hours. When they awaken, they are lost. She treats unfaithful and wicked men with the same punishment, while children that invade her territory are spirited away and hidden behind waterfalls -- never to be seen again.

Another malady attributed to the Madremonte are water born diseases. When people become sick form the water in the river, it is because the Madremonte has washed her hair in the head waters of the river.

If you are to run across the Madremonte while hiking in the forest, there are some weapons you can use against her power. First, you must not show fear, you should hurl insults at her, and try to whip her. If you would prefer not to run into her at all, campesinos say that tobacco smoke or a blessed medallion will protect you from ever seeing her.

Still a better way of seeing the Madremonte, might be to visit the Jardin Botanico in Medellin. There you will find the above statue in her honor. You can also find statues of her in Espinal, Tolioma; El Parque National del Cafe; and in various parades and festivals throughout Colombia, like this one in Tame, Arauca.