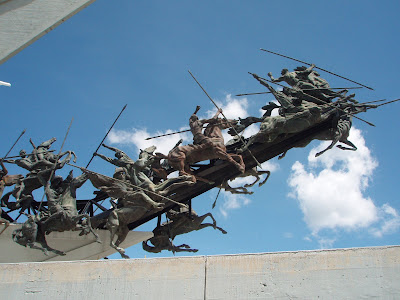 Continuing on our day trip suggestion:
Place #2 – Pantano de Vargas
After spending and hour or so at Puente Boyacá, you can continue on to Pantano de Vargas – Vargas’ Swamp (another hour away). This is the site of the battle, which occurred just a few days before the Battle of Puente Boyacá, on July 25, 1819. This battle turned the tide of the war and brought to the weary soldiers the hope of eventual victory.
Although that name evokes pictures of Southern Florida, the area is anything but swampy. It has beautiful green rolling hills, artesan shops, and an amazing statue of the Lanceros.
The Lanceros were the reason for Bolivar’s decisive victory -- a victory that seemed highly unlikely. Bolivar’s troops were heavily outnumbered and exhausted from a forced march over the high mountains at the Páramo de Pisba. Although there were only 14 Lanceros (Lancers), using deception, they confused and terrifed the Spanish army – under the command of José María Barreiro. Creating an environment in which Bolivar’s men were able to gain the upper hand and win the battle.
Enjoy the pictures of the beautiful Lancero Monument. 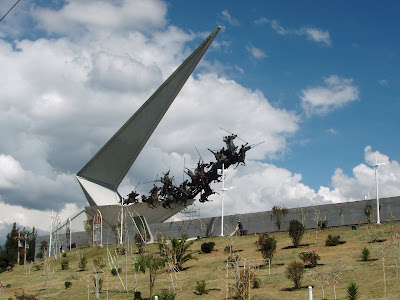