The Great Flood of CHIBCHACUM

By Colombian Mommy - September 07, 2009
One of the most common stories associated with BOCHICA (see the previous post) or NEMQUETEVA is the legend surrounding the "Great Flood" and the waterfall located at Tequendama. This is the story of his first visit and was originally most closely associated with the name NEMQUETEVA, though today most use BOCHICA in reference to this story.

The legend is as follows:

The God CHIBCHACUM (meaning the Head of all DIETY) had become irritated by the people's inability to keep his commandments. They had become full of iniquity following after the Devil -- HUITACA -- committing all kinds of blasphemies.
In his anger, CHIBCHACUM decided to punish the people by sending a great flood. He flooded the plains of Bogotá destroying the crops and homes of the people. Many were killed and some -- those who were less sinful -- escaped into the mountains and began to plead to CHIMINIGAGUA for help. He recognized their humility and sent 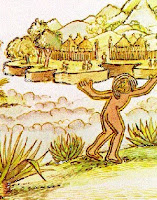 BOCHICA arrived under the sign of a rainbow and threw a golden spear into an area of large boulders and rocks that were blocking the escape of the water. The rocks split asunder and a river began to flow creating a magnificent waterfall -- known as the SALTO DE TEQUENDAMA.

As a punishment for his revenge, CHIBCHACUM was forced to carry the Earth on his shoulders. Thus explaining the frequent earthquakes in the area.
Picture from:
http://www.lablaa.org/blaavirtual/ninos/muisca/muisca6.htm
Altiplano Cundi-Boyacense History Myths / Legends