KAPAX the Tarzan of Colombia 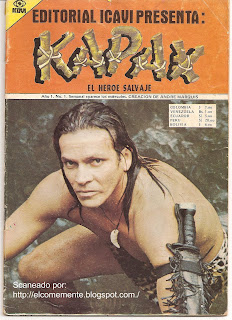 KAPAX, whose real name is Alberto Lesmes Rojas, is considered the Tarzán of Colombia. Anyone landing at the airport in Leticia will see a giant mural of him on the wall of the airport.

He became famous when in 1976, at the age of 28, he swam the length of the Magdalena river -- some 1700 kilometers. It took him about 5 weeks to accomplish this goal. Why did he do this? To help draw attention to the importance of keeping the rivers of Colombia clean -- a man before his time.

He started life in a small town, Puerto Leguizamo, in the department of Putumayo. At the age of 8, his father abandoned the family. As a result, he was left without the means to go to school.

Lonely and bored, he then spent many hours watching black and white Tarzan movies at the local movie theater. He was fascinated. After watching the movies, he would go out into the jungles surrounding the city and practice the moves that he had seen on the big screen -- earning the nickname --Tarzan of the Amazon.

For years, he has tried to teach about the importance of protecting the rivers and forest of the Amazon. Today, he lives in Leticia where he promotes ecotourism. You can actually get him to be your tour guide.

"The most dangerous animal is man."
"He who loves the river, protects it."