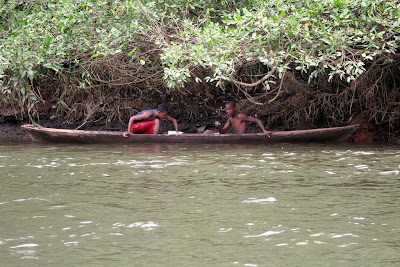 Okay, so I really meant to post this the first week of January, as the event is held from January 1-6 every year, but the move really threw me for a loop. So, now that this event is over, I'll give you a run down so you can look forward to it for next year.

On the Pacific coast of Colombia, there is a unique tradition popular among Afrocolombians. It is called the Balseadas de Santos. The Balseada is actually a procession of canoes, accompanied by a chorus of drums. In the procession, the canoes carry the statues of Catholic saints down the river to where a village or city is located. Then, the canoes come to shore and the statue is carried to the home of a family that has been chosen to sponsor the "partying" all year long. The party then begins. There is marimba music and the woman at the head of the household will begin singing and dancing. The festivities last for several days.