Bogotá for Beginners: Carreras and Calles –Getting around 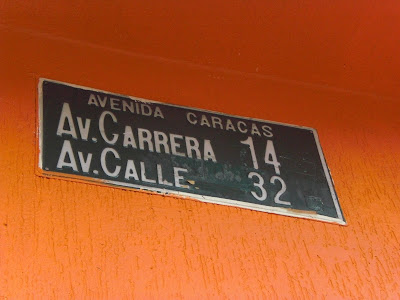 One of the nice things about Bogota is that for the most part it’s arranged on a grid. The streets that run north to South are called Carreras and they are numbered east to West starting from the Mountains. The streets that run east to West are called Calles. So if you look at the address plaque above it will tell you that the business is located at Calle 14 with Carrera 32. Usually the plaque would have another number after the 32 that would indicate the street number. Ex. Calle 14 Carrera 32-8. The 8 would be the building's number.

There a few disclaimers though:

Although Bogota uses a Cartesian numbering situation not all the streets are a straight grid. For example in some areas Carrera 13 is right next to Carrera 8 because it wiggles around. Also many of the streets have alternate names that are more commonly used i.e. Carrera 14 is always called "La Caracas" (see sign above)