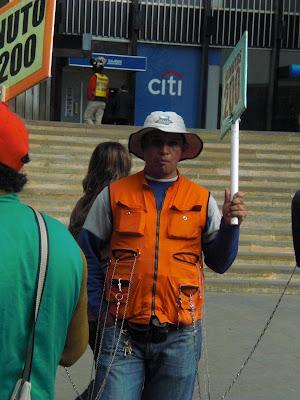 Cell phones in Colombia are omni-present. Everywhere! Most people have pay as you go phones and if you were going to be in Colombia for more than a few weeks I would definitely recommend buying one. You can get one for about $25. If you will be there just a week or less you can probably make due buying “minutes” from cell phone call vendors who hang out on the street. Usually they stand around on the street wearing a vest that says minutes and with a few cell phones chained to their persons. There are also differences in cost when you call between cell phone companies. For example it is my understanding that it costs more to call between Comcel and Movistar than it does to call from a Comcel phone to another Comcel phone. Phones can be charged with minutes at groceries stores like Ley or Exito or at cellphone stores, which are pretty common.