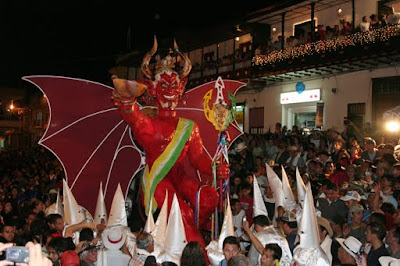 The festival is also known as the Carnaval del Diablo (the Devil's Carnival). It takes place in what today is known as Rio Sucio (Caldas).

Originally the area that is now known as Río Sucio was divided into 2 communities -- La Montaña & Quiebralomo. The two communities were strong rivals. They each had their own park, church and priests.

The priests were tired of the constant fighting between the two groups and formulated a plan to get the people to be more united. They announced that the Devil would punish anyone who did not join together in unity. Then, they had a large party on Three Kings Day (Reyes Magos). The people did join together and the party proved to be a great success.

In time (by 1915), the city adopted the symbol of the Devil as the focus of the festival. The Devil is used to remind the people of the threats made by the priests if community union is broken.
Antioquia and the Eje Cafetero Festivals