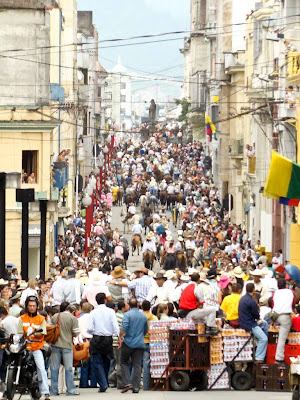 Okay, so this is yet another late post, but think of all you have to look forward to next January! You could actually make plans to go to Manizales and experience first hand the Feria.

In 1951, after the 400th anniversary of the founding of the city, a parade of antique handcarts and several bullfights were organized. It became a popular annual event. Then in 1954, after having seen the Feria in Seville, Spain, Osacar Hoyos Botero decided to try to create something similar in his hometown of Manizales. So, in 1955, the Feria de Manizales as a city sponsored activity was organized. It main feature was and is the the traditional Bullfights. Maestro Bullfighters come from all over America and Spain to participate.

There is also a large horse parade (Cabalgata), a traditional Manola, folkloric dancing, fireworks, musical presentations, a trova competition, and of course, a beauty contest.

The Feria de Manizales in the 2nd largest celebration in Colombia -- behind the Carnaval de Baranquilla.

In 1957, the official anthem -- a Pasodoble entitled "Feria de Manizales" -- was introduced. You can purchase this song for 99 cents at Amazon.com.