By Colombian Mommy - July 05, 2010
One of the pluses of heading to Colombia this summer is that the country is in high gear in celebration of its 200th anniversary of Independence. I want my boys to remember Colombia's Bicentennial the way I remember America's Bicentennial in 1976. I was the same age as my Little Colombianito the year my country celebrated its Bicentennial. For years, I had a Bicentennial quarter and 7-up bottle in my room.

Not sure what trinkets we will pick up for the boys, but I want it to be memorable for them. For those of you who are not familiar with the story of Colombian Independence, here is a recap:


The first movement for Independence from Spain which began in what is now Colombia on the 20th of July 1810. On that day, a group of citizens known as Criollos (those of Spanish descent born in the Americas rather than in Spain), went to Don José González Llorente´s home (Llorante was a Spaniard) on the pretext of borrowing a flower vase for a dinner that was to honor the Royal Commissioner Antonio Villavicencio. This event, without any apparent significance, unleashed a confrontation between the Criollos and the Spanish that ended in the eventual independence of Colombia.

The roots of this conflict were established in the years leading up to the 1810 Flower Vase Incident. In Nueva Granada (Colombia), the Spanish ruled through local governments called Juntas and Cabildos. In the Juntas that were held in the years prior to 1810, the Criollos were very poorly represented -- 36 Spanish representatives to 9 Criollos. The Criollos were very dissatisfied. They felt that their interests were not well represented and many had secretly begun to discuss creating an independent nation state.

In an act of protest, Criollos soon formed a secret group, also called a Junta, that included several prominent Criollo civil authorities and intellectuals. They began meeting in member's homes and then moved their meetings to the Astronomical Observatory, whose director was Francisco José de Caldas.

In the meetings, they devised a plan to provoke a limited and temporary public disturbance which could then give rise to an overall feeling of public discontent with the Royalists of Spain. Their hope was to then take control away from the Spanish.

They chose to stage the event on the 20th of July because it was Market Day (Día del Mercado) and the main Plaza would be full of common citizens.(La Plaza Principal is known today as the Plaza de Bolívar in Bogotá)

On the appointed day, a little before noon, Luis de Rubio went to Llorente's store to ask to borrow the flower vase as a decoration for the dinner in honor of Villavicencio. Llorente denied his request explaining that he had let others borrow the vase and they had done damage to the vase and it was losing its value as a result. 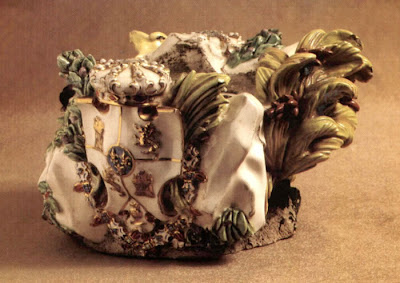 The base of the famed Flower Vase of Llorente


At that very moment, Francisco José de Caldas "happened" by in the company of Antonio Morales. They greeted Llorente and then de Rubio began explaining that Llorente wouldn't let him borrow the vase and Morales began yelling toward the people in the square that Llorente was using bad language in referring to Villavicencio and other Criollos. Something that Llorente categorically denied.

Meanwhile, the other members of the group began to disperse through the crowded Marketplace yelling things like: "They are insulting the Americans!" "We want our own Junta!" "Down with the government!" "Let the Bonapartes die!" etc. The people in the market began to become enraged. Indians, Mestizos, Criollos, rich and poor began to throw rocks and break windows. The Viceroy, the military, and the Spanish began to worry. The Criollos declared a new government "la Junta de Gobierno" which was to replace the Viceroy.

This was just the beginning -- Colombia's first step toward independence. There were many additional protests, considerable violence, and a war before Colombia would become independent.

While in Bogotá, we plan to visit the Museum of the Flower Vase or the House of the 20th of July. I recommend that you go too! Take pictures with your kids and teach them the history of Colombian Independence.

The Museum is located on the North/East corner of the Plaza de Bolívar. Below you will find the information about the museum. 20th of July Museum or the Home of the Flower Vase (Museo el 20 de Julio o Casa del Florero)

Tours are always available in Spanish. However, I believe you can schedule a tour in English or perhaps other languages prior to your visit.

Steveriffic said…
Thanks for the info! I just recently discovered that I'm related to Antonio Morales, but it's hard to find much English-language information on him and the 20th of July. Nice work.
July 21, 2010 at 10:27 AM