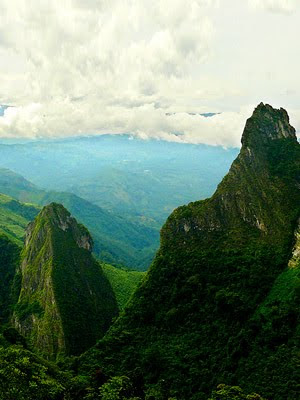 Today's myth comes from the now extinct indigenous group called the Muzos. They inhabited what is today the Western part of the department of Boyacá, near the city of Muzo. (This is the region most famous for its beautiful emeralds). Unlike their Chibcha speaking neighbors, the Muiscas, the Muzos were more closely related to the Caribes. They worked in agriculture and pottery, but their favorite activity was war and their favorite victims were the Muiscas. They would often assault Muisca villages in order to get the supplies that they needed. It took the Spanish over 20 years to conquer the Muzos, while is took just a few short months to conquer the Muiscas.
And now, the legend of Fura Tena and the Emerald Tears.
In the land of the Carare (Magdalena) River, the Muzo creator God, ARE, swept over the area creating the mountains and valleys. On the shores of the sacred river, now called Minero, he formed two figures -- one male (Tena) and one female (Fura) -- and threw them into the river. There, they were brought to life. Once alive, ARE taught Fura and Tena how to take care of the gardens that He had planted and make pottery. He gave them rules to follow including the requirement of fidelity in their husband and wife relationship. ARE taught them that violating the laws he had established would lead to aging and eventual death. For a long time, Fura and Tena enjoyed their ageless lives in the beautiful land ARE had prepared for them.
Then, one day, a young man appeared. His name was ZARBI. Zarbi was looking for a flower that could cure any illness. He claimed to have crossed mountains and rivers, looking high and low for the flower without success. So, he asked Fura for help, and she agreed and began to follow him throughout the forests looking for the flower. Soon Fura became aware of her own interest -- not in the flower, but in Zarbi. She was unfaithful to Tena with Zarbi and as a result immediately began to age.
Realizing her error, she returned to Tena, who upon seeing her in her aged state realized that she had broken the law that ARE had given them and she would soon die. Not wanting to be left alone, Tena laid down on Fura's knees and stabbed himself in the heart. For three days, Fura cried with the body of her husband on her lap -- her tears changed into green rocks -- EMERALDS.
Soon, ARE returned to visit Fura and Tena and realized that his laws had been broken. He changed the couple into large rocks. Angered, he also banished Zarbi, who in his own anger changed into a raging river in order to eternally separate Fura's rock from Tena's rock.
The picture above shows the Fura and Tena rocks.
Photo:
http://www.fedesmeraldas.com/portel/libreria/php/decide.php?patron=01.020102
Myths / Legends