By Colombian Mommy - March 10, 2011
Several years ago, I sat in the court room as my husband took the oath as a new American citizen. Just prior to taking that oath, he had been told that he could change his name to anything he wanted. There was mention of dropping one of his two last names. But, as he told me later, "I just kept thinking of my mom. How could I just eliminate her from my name?" So, the change he decided to make was to place a hyphen between his two surnames.
With this in mind and fresh off yesterday's discussion, I have an assignment of "required reading" for my readers. While I do not intend to change any American tradition, I do think that it offers a valuable perspective for understanding the feeling that many Latinos have about their two last names. I recommend it for anyone wishing to better understand this unique tradition.
The book itself is written by a man from El Salvador -- René Colato Laínez. The name of the book is René Has Two Last Names. 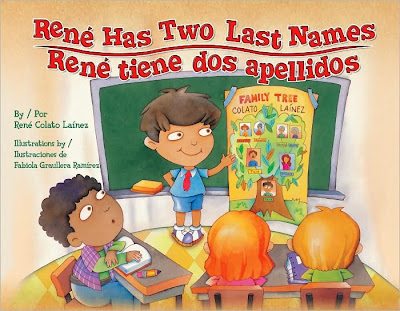 In the book, you learn to understand and appreciate why young René, a new immigrant to the United States from El Salvador, doesn't want to be called just René Colato, but rather René Colato Laínez.
If you can't find it at your local library, it can be purchased here:
http://www.amazon.com/Rene-Last-Names-tiene-apellidos/dp/1558855300/ref=sr_1_1?ie=UTF8&s=books&qid=1299739274&sr=8-1
*************Rare Personal Moment to Follow*******************
Just a side note, my children do lug around with them TWO LAST NAMES -- thank heaven for hyphens, computers can't handle it otherwise. They don't even seem bothered with it and now even my Kindergartener knows how to write them both. I know it's not right for everyone, but I think even my dad (and I know you are reading this), though he was initially resistant, is secretly thrilled that as a father of all girls he actually has 2 grandsons that carry his last name. (You know you love it DAD!)
Book Suggestions Names