By Colombian Mommy - April 04, 2011
Here is a myth, just in time for the upcoming Semana Santa (Easter Holy Week). It comes to us via today's department, CESAR.
La Sirena Hurtado
Once, there was a beautiful, yet obstinate little girl. Born in Valledupar, she was spoiled and accustomed to always getting her way. She never listened to her parents and was rebellious and disobedient.
One afternoon, she decided to go swimming in the Guatapurí river in a spot called the POZO DE HURTADO. When her mother realized what she was planning on doing, she forbid it -- after all it was JUEVES SANTO (Maundy Thrusday) and swimming would be disrespectful to the Lord, Jesus Christ. However, in her usual fashion, the girl ignored her mother and snuck out the door.
When she arrived at the Pozo de Hurtado, she took off her clothing and jumped into the water from the very highest rock. When she hit the water, the sunny afternoon sky turned dark. Then, when she tried to surface, she could not. Her legs became heavier and heavier and she was unable to move. Slowly, she worked her way to the shore where she discovered that her legs has changed into a fish tail. She had turned into a mermaid. 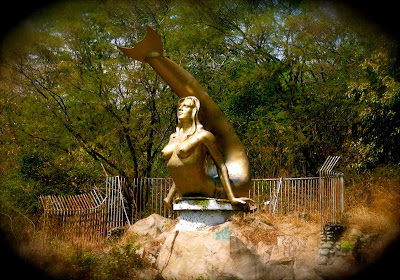 As the afternoon dragged on, her mother realized that her daughter was missing. She ran to the river calling her daughter's name, but there was no response. The mother, believing that her daughter had drown, ran into town seeking help. She hoped that the townspeople would help her find the body of her daughter. Most of her neighbors agreed to help look for the girl the following morning.
At first light on Viernes Santo (Maundy Friday), dozens of people headed for the river. There, as the rays of the sun first struck the rock from which the girl had jumped the day before, the crowd of family and neighbors saw the mermaid as she waved her tail and dove into the water, never to be seen again.
People still claim that if you listen carefully late at night, you can hear the lonely Sirena's songs as they lilt gently in the breeze along the banks of the river Guatapurí.
Caribe Myths / Legends