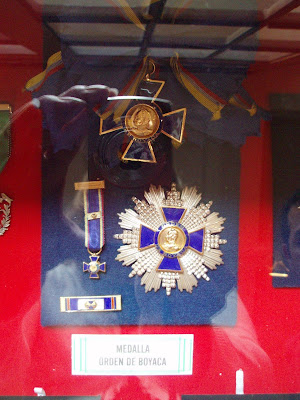 The first military decoration in Colombia was created in 1819 and given to those who stood out participated in the Battle of Boyacá. This award was then forgotten for a century. Then in 1919, the government of Marco Fidel Suarez reestablished the award as a military decoration.
In 1922, a decree established that the "Cruz de Boyacá" (Cross of Boyacá) could be awarded not only to military leaders, but also to foreign dignitaries.
In 1930, Decree #1247, converted the Cruz de Boyacá into the "Orden de Boyacá" (Order of Boyacá). This new Orden de Boyacá could be awarded to not only the military, but also to civilians. There are several classes in the order, but in order to win the award in any class the person must have offered outstanding service to Colombia.
This week it was announced that a WOMAN -- Yvonee Nicholls -- will be receiving the award at the ceremony in August. You can read about her here:
http://www.eltiempo.com/gente/yvonne-nicholls-recibira-la-cruz-de-boyaca-_9757264-4
Current Events History